The trilogy presents different languages and characters but explores analogous themes: the investigation of human nature, the pursuit of happiness, the role of eroticism, the active and pervasive force of imagination and the infinite variations and meanings of disguise.

The mutability of the human soul is captured in the continuous oscillation of order and disorder, ecstatic balance, emotional earthquakes and unpredictable accelerations of meaning.

Mozart more than anyone else shows the strength of music in making the changing of feelings perceivable. We are faced with an author who thinks in theatrical terms and that has no limits in researching the vast possibilities of scenic writing. 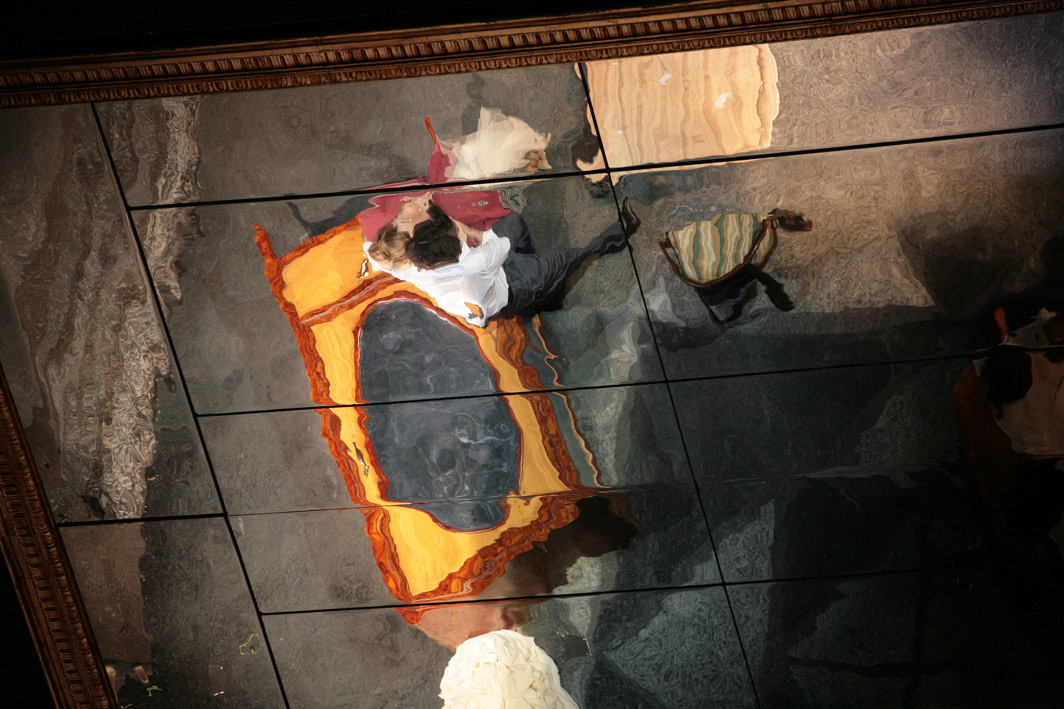 Summary from an interview with Lidia Bramani

The project was born out of the desire to offer the audience a new approach to these three masterpieces, through different modes of experience and different perspectives.
The three titles are part of a single musical and theatrical universe. Even though the languages and characters are very different, the themes are actually similar: the human pursuit of happiness, presenting an exceptional investigation into human nature and the variety of human sentiments.

It is a very special experiment that involved the design of a unique stage system in which Le nozze di Figaro, Don Giovanni and Così fan tutte could coexist, and the question on how to stage them. 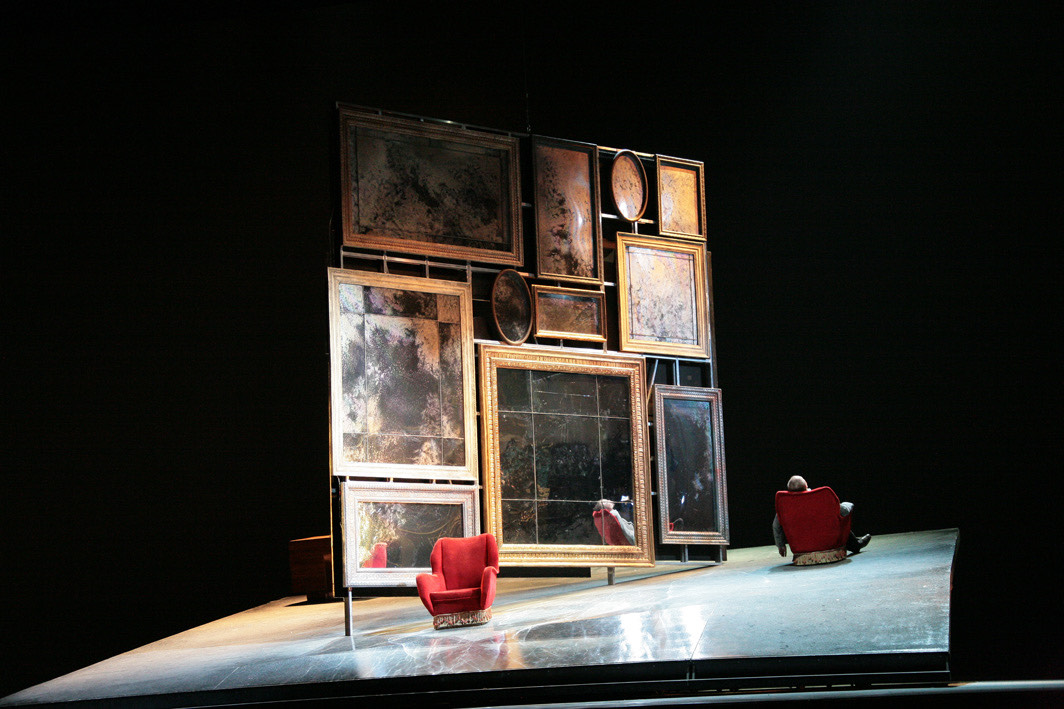 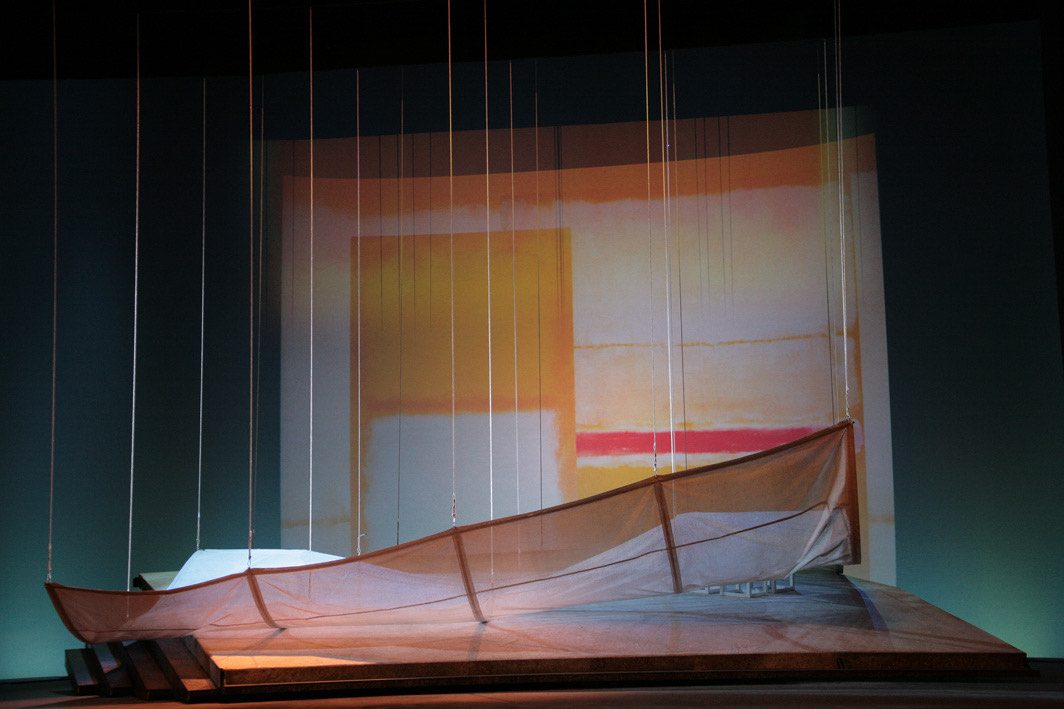 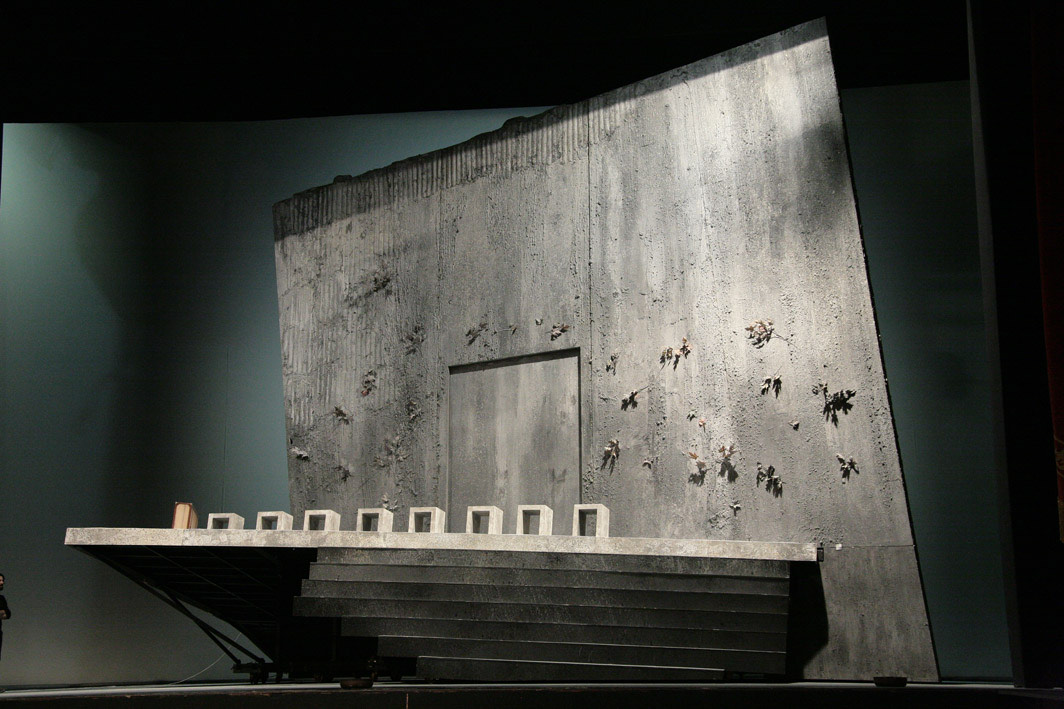 What does it mean for a director to stage three operas of this level in the same project? We are talking about setting them up at the same time, not at a distance, say, one month apart from each other.

In order to proceed with the work, we always rehearsed at least two of the three pieces on the same day, so that nothing we did would lag behind or could be lost. In addition, some singers play two different roles and in order to ensure a system of substitutions, almost all singers rehearsed two, even three different characters. It was unusual and tiring but exciting at the same time: the result was a small army of very cohesive singers-actors.

From an expressive point of view, it seems to me that it is possible to pass from one work to another with extreme simplicity. This, together with the common scenic production of the three performances, contributed to a development of imagination and sensibility for the scenic space, thus giving us the ability to concentrate more specifically on the great differences of the subjects, spirits and narrative modes that we wanted to highlight. 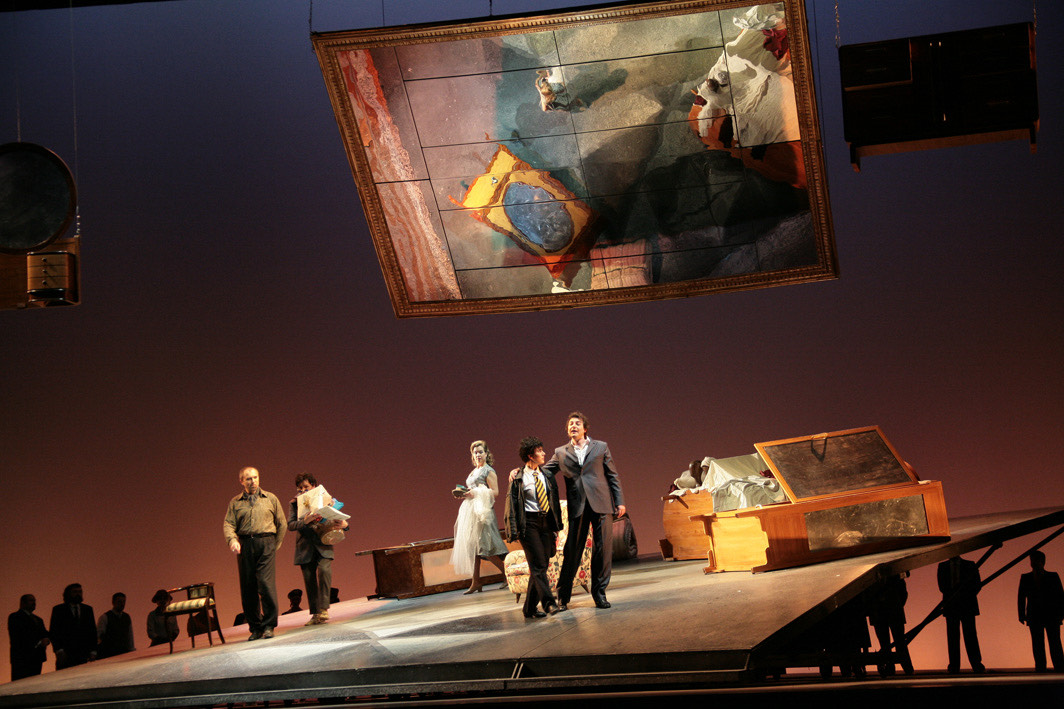 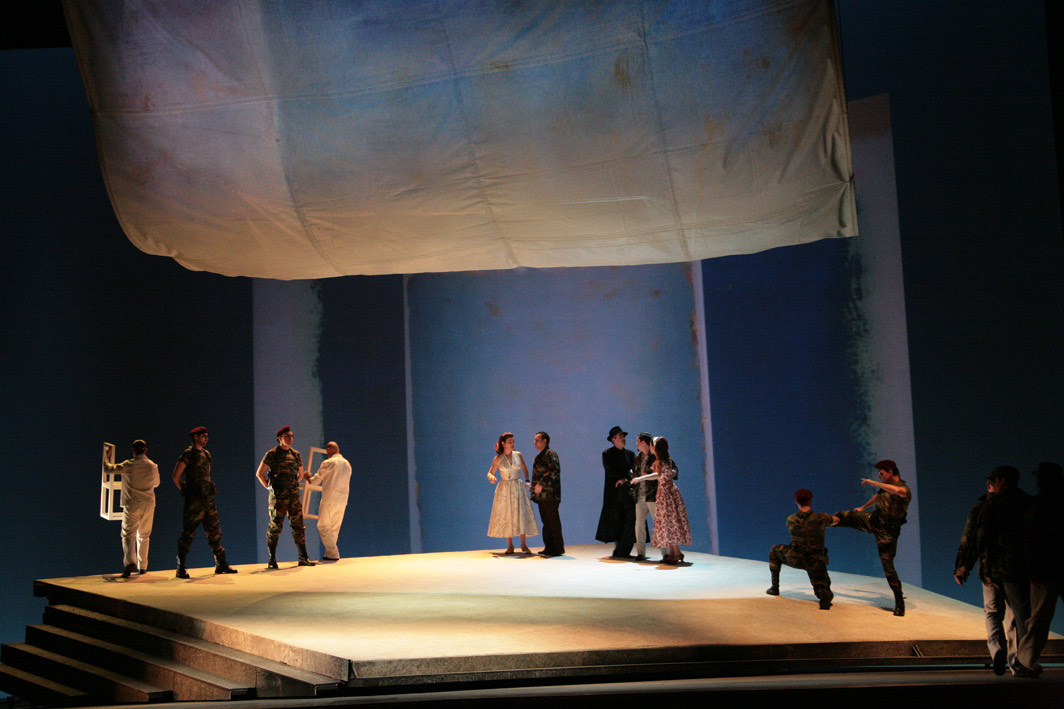 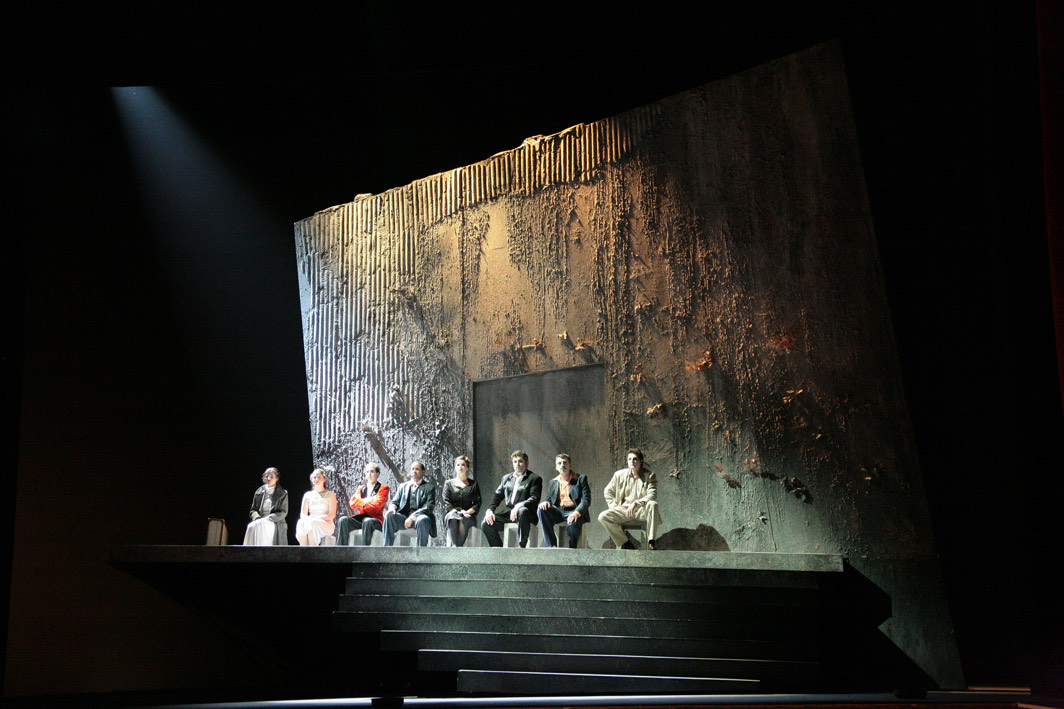 What does it mean to investigate very different issues within the arch of common sense?

The subjects of the trilogy have common roots. All three operas speak about the struggle of humans for freedom. Mozart and Da Ponte investigate a rare and fundamental subject: people’s happiness. The common substratum of all three texts is comedy and, in all three, the central role is the eroticism. Starting from this common aspect, the profound differences I mentioned earlier emerge, and I am convinced that the combination of these differences can lead to an enrichment. This would not be possible if there wasn’t a great common reflection on the Theatre: the three texts have in common a meta-theatrical effect and somehow require us to focus on the theme of fiction. In Le nozze di Figaro fiction is the central driving force, it is necessary to safeguard the truth, therefore it results in lies, plotting, and disguise. On the contrary, in Così fan tutte we witness a continuous unmasking of fiction from the first scene on and Don Giovanni is both its apotheosis and its failure. 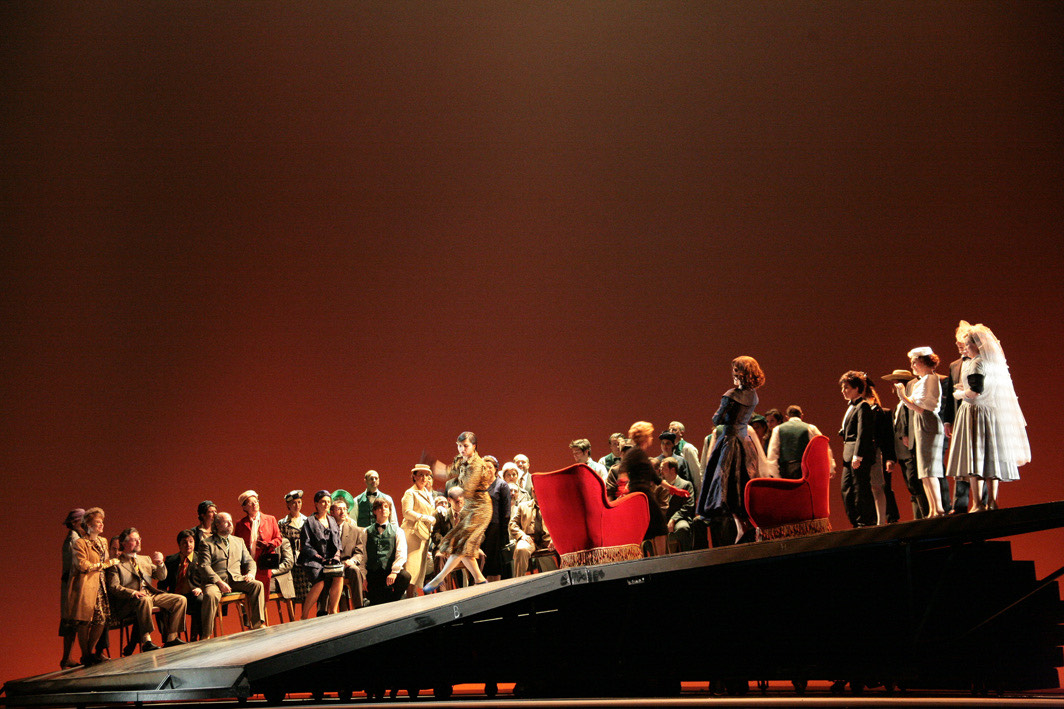 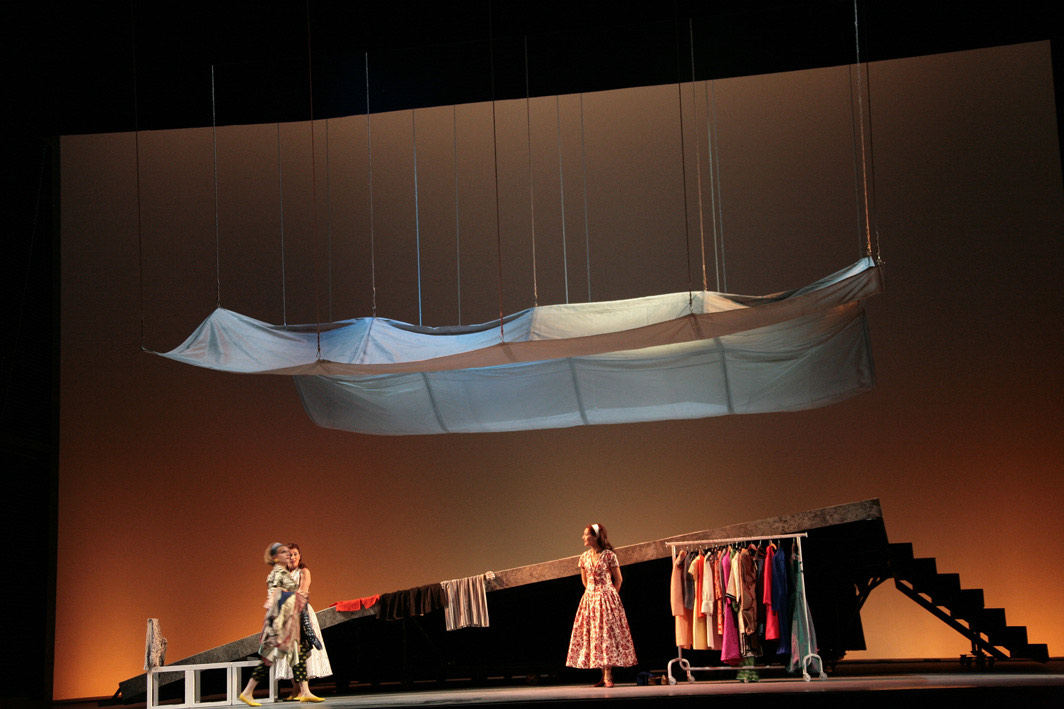 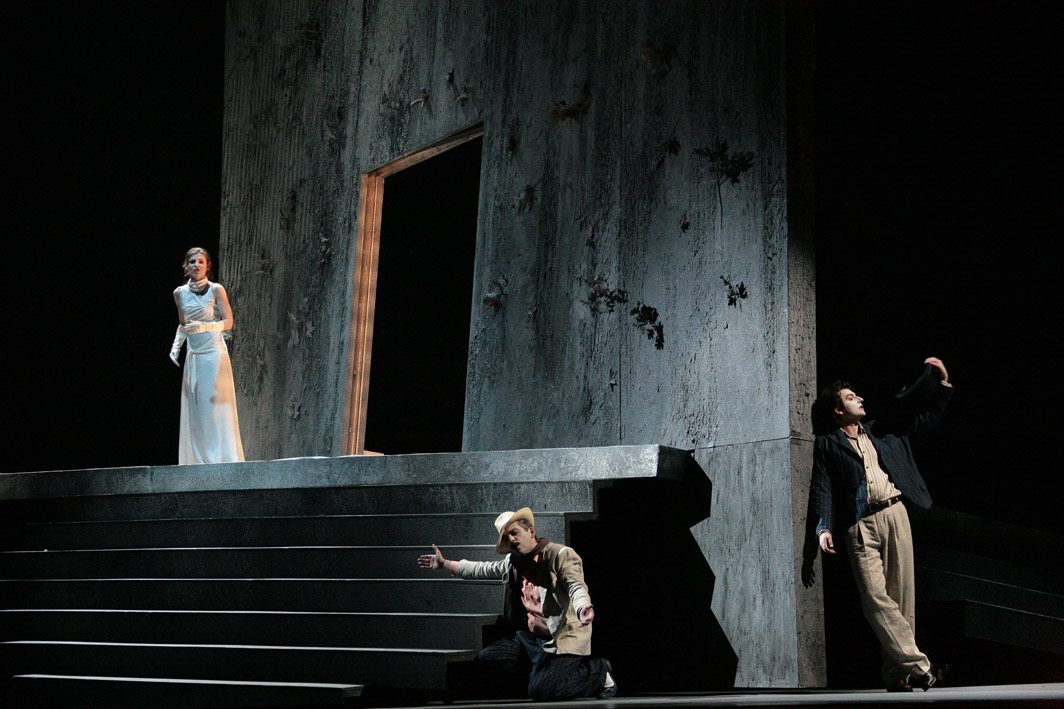 What does the choice of a unique scenic space depend on?

This kind of project strongly addresses the utmost essentiality of theatrical language, and of direction. Let’s take the scene of the sextet in Don Giovanni’s second act: where are we? In an exterior, on a street or in Donna Anna’s building? There is not a single concrete reference. We are in an abstract place which is the sum of different narrative needs, as in the case of Elizabethan theatre. The abstractness of a space, makes it paradoxically even more “physical” than a realistic space. As if all three operas lived within a single architecture, among other things in motion, and we only changed from time to time some single elements, such as lights and colours. Instead of limiting us, this single space drives us to find different meanings to the same elements, thus multiplying possibilities of interpretation. 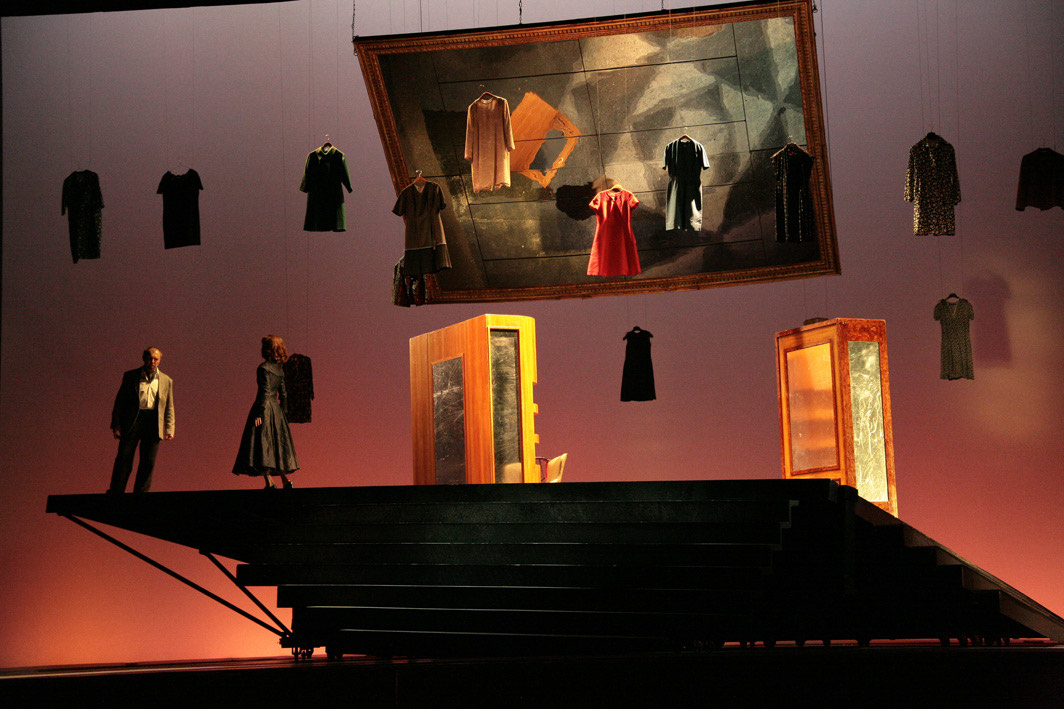 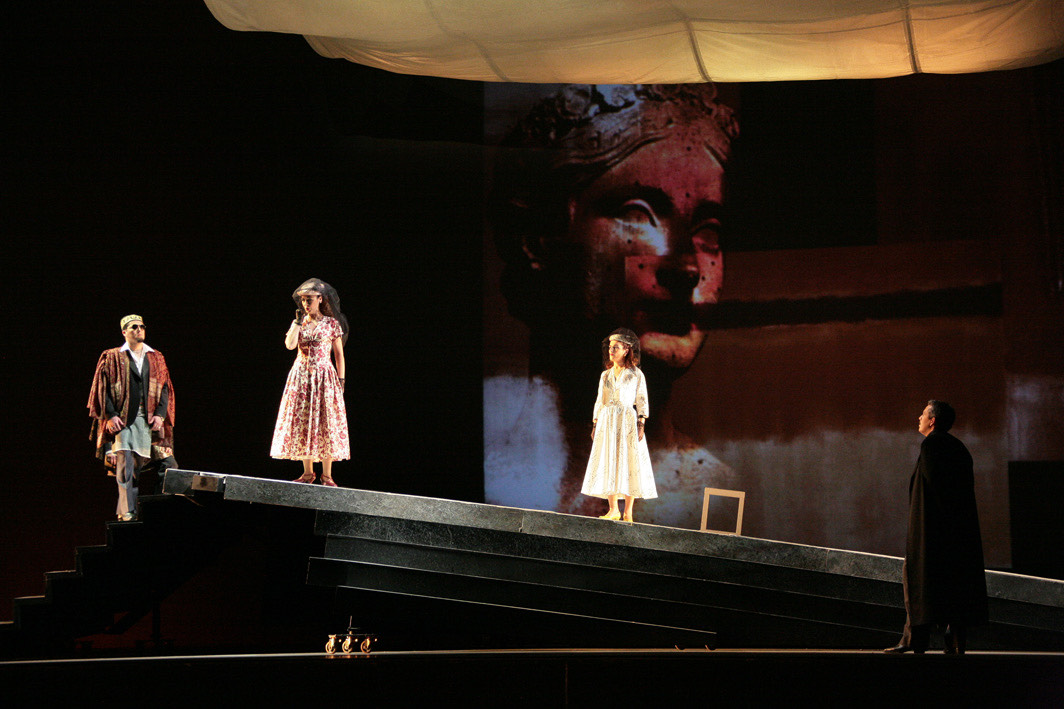 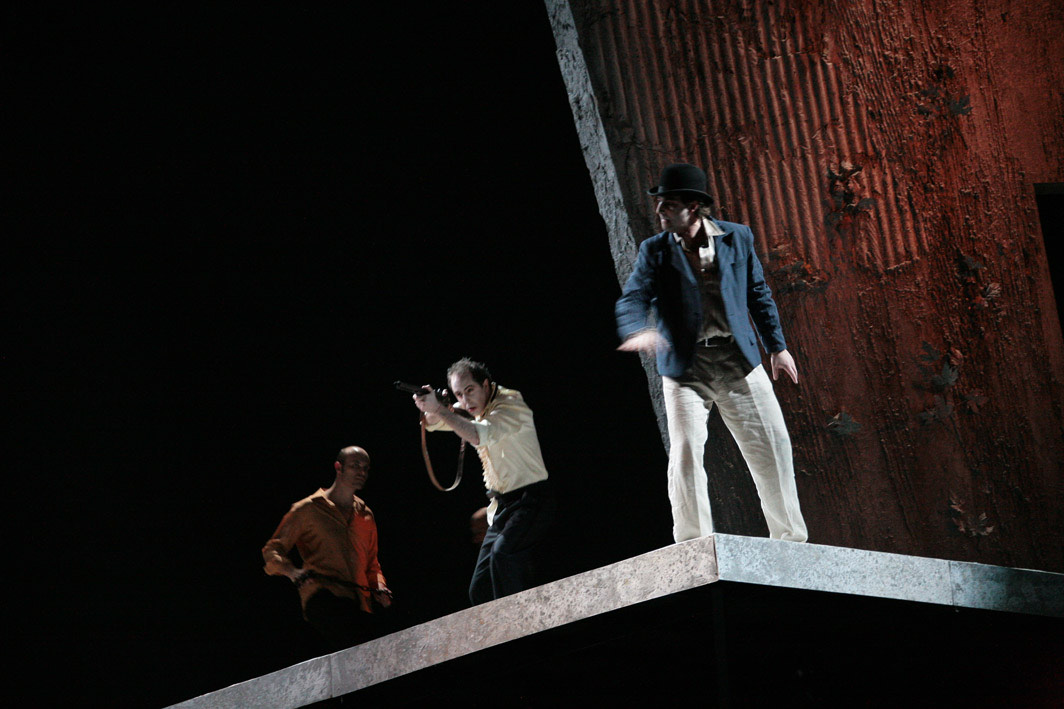 What are instead the differences, even within a common sense and path?

Simplifying a lot, Le Nozze di Figaro is pure theatre: comedy is there for everyone, obvious to the characters and the audience. The expressive and linguistic perfection of Le nozze di Figaro hides a great social and interior disorder. Le nozze di Figaro gives us moments of irony, confrontation, fun, cunningness, intolerance and pain; it talks to us about revolution through the ambition of happiness. Cosi fan tutte is a strange “comedy about comedy”. Each action and relevant comment create a duplicity that is able to settle the apparent banality of the amorous theme and leads to some absolute meanings. In Don Giovanni, on the other hand, we reach a sort of overcoming of the Theatre, with a crisis of the very concept of character and interpretation. It is an extreme opera, in which for the first time the theme of death appears, which is the reason why we have changed the chronological order and decided to present it at the end of our journey. 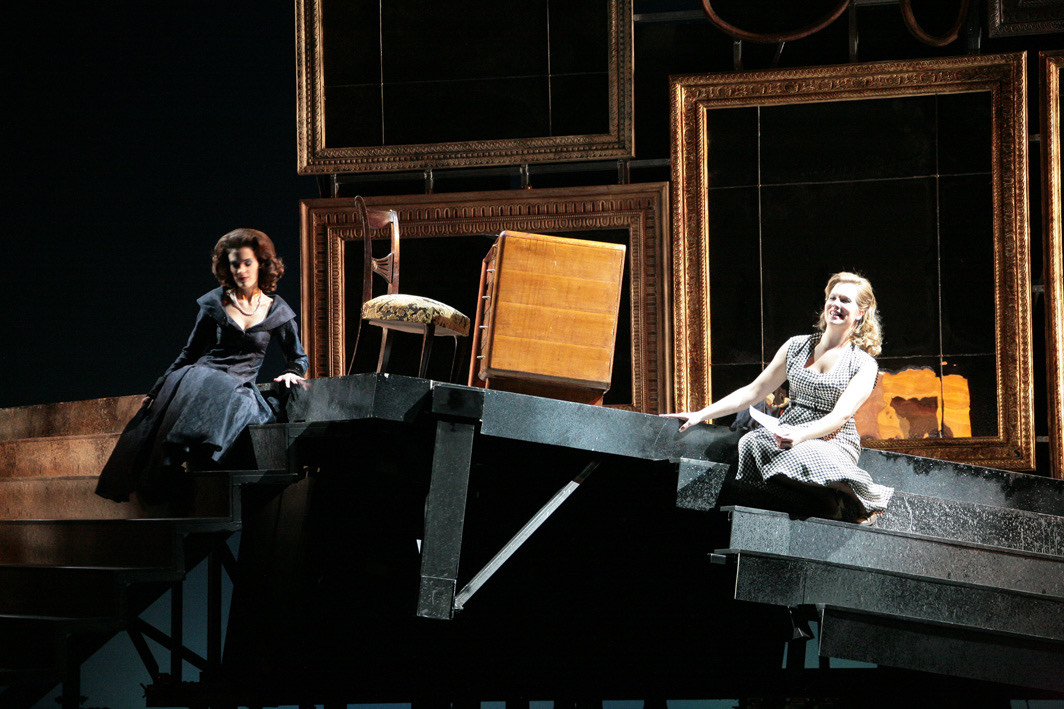 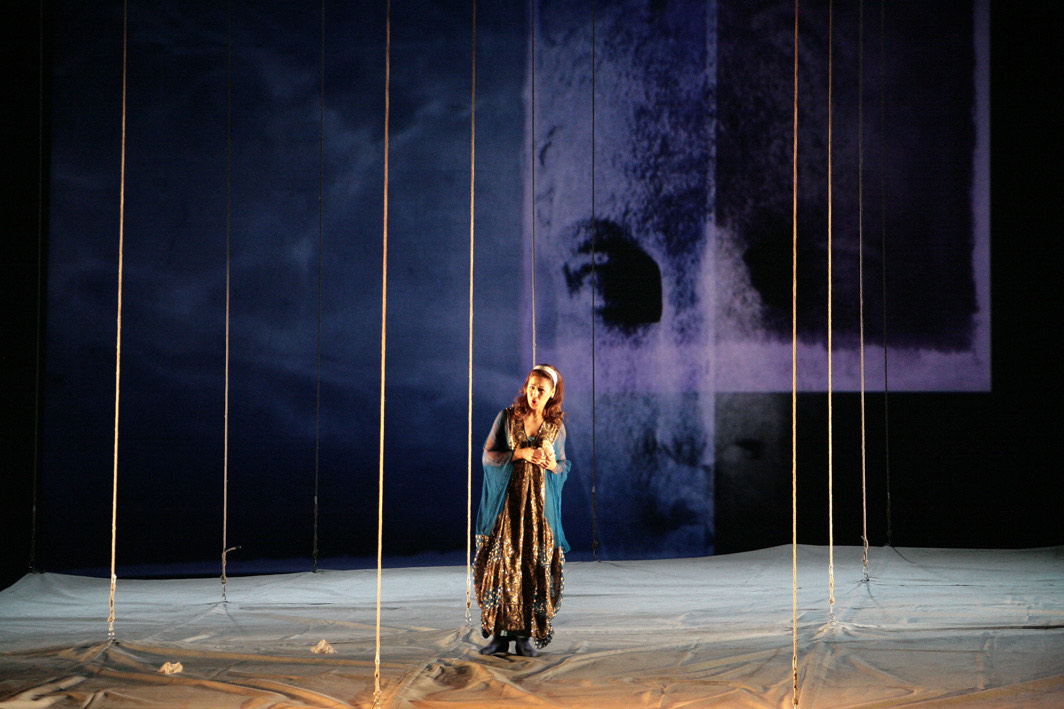 What can one learn after this “training ground” of musical theatre, as you called it?

We can learn that we are not working on monuments of the past but on texts that are in our hands; texts that can be understood and reinterpreted, made our own, texts that can give new emotions and new meanings.